The Danube majestically connects epoch's former monarchies. In the magnificent capitals of Bratislava, Budapest and Vienna, you can visit old coronation sites, storm castle palaces and waltz through the cities' cafés. Reserve your favorite spot on the sun deck – the landscapes of the Wachau region are simply breathtakingly beautiful! Afterwards, the baroque monastery of Melk Abbey towers above the river, which takes you across the picturesque Ybbs and lovely Linz back to Passau.

Let us inspire you. Here you will find some pictures and information about the cities on this route.

Located in Germany at the confluence of three rivers, the Danube, Inn and Liz, the Bavarian town of Passau has a charm that attracts tourists from far and wide. Rich in history, the town can trace its roots back to the 2nd century AD when it was established as a colony of the Roman Empire.

Today, the town boasts superb examples of Gothic and Baroque architecture, including the Cathedral of St. Stephen. Built in 1688, this magnificent cathedral houses one of the world's largest pipe organs and is a major attraction for visitors. Other notable buildings in the town include the Church of St. Michael and Lamberg Palais. With a population of only just over 50,000, Passau is a peaceful town and not at all difficult to get around for visitors. It's certainly worth a visit.

Bratislava, the capital city of Slovakia, lies on the Danube in the west of the country. The city is renowned for its bar and café culture, giving the place a lively feel despite its population of under half a million. Bratislava Castle, rebuilt in the 1950s after a devastating fire over 100 years earlier, lies on the edge of the old town. The city is full of parks and green spaces, with several lakes for people to walk or relax beside. The Old Town Hall dates from the 15th century and is Slovakia's oldest city hall. Nearby is the much more recent Man at Work, a humorous bronze sculpture by Viktor Hulík depicting a man climbing out of a manhole. As the country's capital, the city also contains a wide range of museums and galleries, as well as the National Theatre.

Budapest is one of the most beautiful cities in the world. As the capital of Hungary, it is full of history and heritage with a mass of attractions, ancient and modern. Magnificently straddling the Danube, the city is as equally impressive to view from the water on a river cruise as when walking the streets. Everywhere is a feast for the eyes and the photo opportunities are endless. Architecture is flamboyant with major attractions being the Royal Palace, Parliament, the Fisherman's Bastion, Heroes Square, and the Basilica of St. Stephen. Must-visits include the statues in Memento Park and the House of Terror in the Jewish Quarter.

Something else not to be missed is the Szechenyi Baths, one of the biggest natural hot spring spa baths in Europe. It's a terrific place to unwind the day after sampling the exceptional nightlife. Budapest is super tourist friendly and budget-friendly.

Esztergom has a rich history. It is the city where the first King of Hungary was born. His name was Saint Stephen and was also crowned as the King of Hungary. Therefore the city is located on the right bank of the Danube River, making the border between Hungary and Slovakia. Visitors can have a tour in the city, admiring the beautiful sights of the city. Saint Stephen Square is the most beautiful squares lying in a spectacular area at the castle hill just close to Basilica. The green areas that are attached to the Danube walkway one can find playgrounds, shops, and restaurants. Aqua Island is an amazing, extensive bath complex in the city. It has a building that is remarkable with plants on its rooftops. The bath is full of pride with a variety of equipment such as caves, slides, and infra saunas that visitors can enjoy. In the Esztergom Castle Theatre, there are several plays in which one can enjoy a unique experience. The city also plays a significant role in promoting the culture of the Turkish. Therefore, the city will be interesting for a guest on a River cruise.

Sitting on the majestic River Danube, Vienna is one of the most culturally-rich cities in Europe. Whether passing through on a river cruise or on a weekend break, there's plenty to soak up in the capital of Austria. The city has long been Europe's spiritual home of classical music and the orchestrations of many of the great names seem to exude from the streets that are packed with magnificent architecture much of which reflects the grandeur of the imperial Hapsburgs. Must-see attractions include the Hofburg Palace, Schloss Schönbrunn, and City Hall.

The cultural richness is evident in a clutch of excellent museums such as the Kunsthistorisches Museum Vienna and the modern MUMOK. You can catch a musical performance at the opera house or Musikverein or learn about the "City of Music" at the Hans Der Musik Museum. The Austrian capital has a wonderfully vibrant café scene and it's easy to while away a few hours with a slice of sachertorte and a glass of apricot liqueur alongside an excellent coffee.

Melk has acquired a beautiful name: The gateway to the Wachau. Anyone approaching the historic town on the Danube will notice Melk Abbey, which is enthroned high above the river, very early on. This is part of the UNESCO World Heritage Site and is worth a visit at all times of the year. The impressive baroque ensemble has been run by the monks of the Benedictine order since 1089. Culture, faith and science come together in the magnificent rooms of the monastery.

Ybbs refers to a Danube cruise port and a city located in Austria with about 6,000 inhabitants. The town was founded in the Middle Ages (around 1317 AD) at the crossroads of important sea routes along the river. The town’s Persenbeug power plant is the first river power plant in Austria. Between 1907 and 1953 the city was connected to the western railway in Kemmelbach via the town's main road, one of the shortest tram lines in the world (length 3 km / 2 ml).

Ybbs on the Danube is characterized by its unique position as a gateway between Nibelungengau and Strudengau. The historic centre has been modernized in an exemplary manner and invites you to stroll and relax with its passionate courtyards, the powder tower and the townhouses from the 15th and 16th centuries. This town is a wonderful place to spend your holiday, do not miss out!

The River Danube changes its direction of flow, due to a bend in the river, in the Austrian city of Linz. Visitors to Linz / Danube will enjoy the Donaupark which forms a part of the city's 'cultural mile'. The park is located between the Brucknerhaus music venue and the Kunstmuseum. The whole city can be viewed from the Pöstlingberg mountain. The 100 year old Pöstlingberg tram provides a comfortable way of reaching the summit. There is a connection from the city's main square.

For unique shopping experiences, the Landstrasse offers a selection of vintage boutiques providing previously owned furniture, designer fashions, and jewellery. The Mariendom holds the title of 'largest cathedral', not only in Linz / Danube, but in the whole country. It boasts a capacity of 20,000 worshipers. A visit to Paul's brewpub should provide a great experience for those with a taste for craft-beer. Hearty meals are also available.

The MS VIVA MOMENTS (ex ROBERT BURNS) with 88 cabins invites up to 176 passengers to enjoy feel-good moments on board. On the Diamant Deck there are four luxurious balcony suites, which invite you to enjoy the beautiful view with a size of 24 m² and a walk-on balcony. On the Diamond Deck, as well as on the Ruby Deck, there are 19 m² Junior Suites, which have a French balcony. The main part of the cabins is made up of 2-bed cabins of 16 m². These have French balconies on the Diamond and Ruby Decks and non-opening windows on the Emerald Deck. All cabins are perfectly equipped with flat screen TV, included minibar, beauty products from RITUALS®, hairdryer, safe, air conditioning, shower and toilet.
Travel dates
Travelers
Please note that only double and single occupancy are available via our website. For our family rates please contact us by phone or email. If you wish to book several cabins, a separate booking is required for each cabin.
Adults:
Deck plan
Here you can see an overview of the decks. 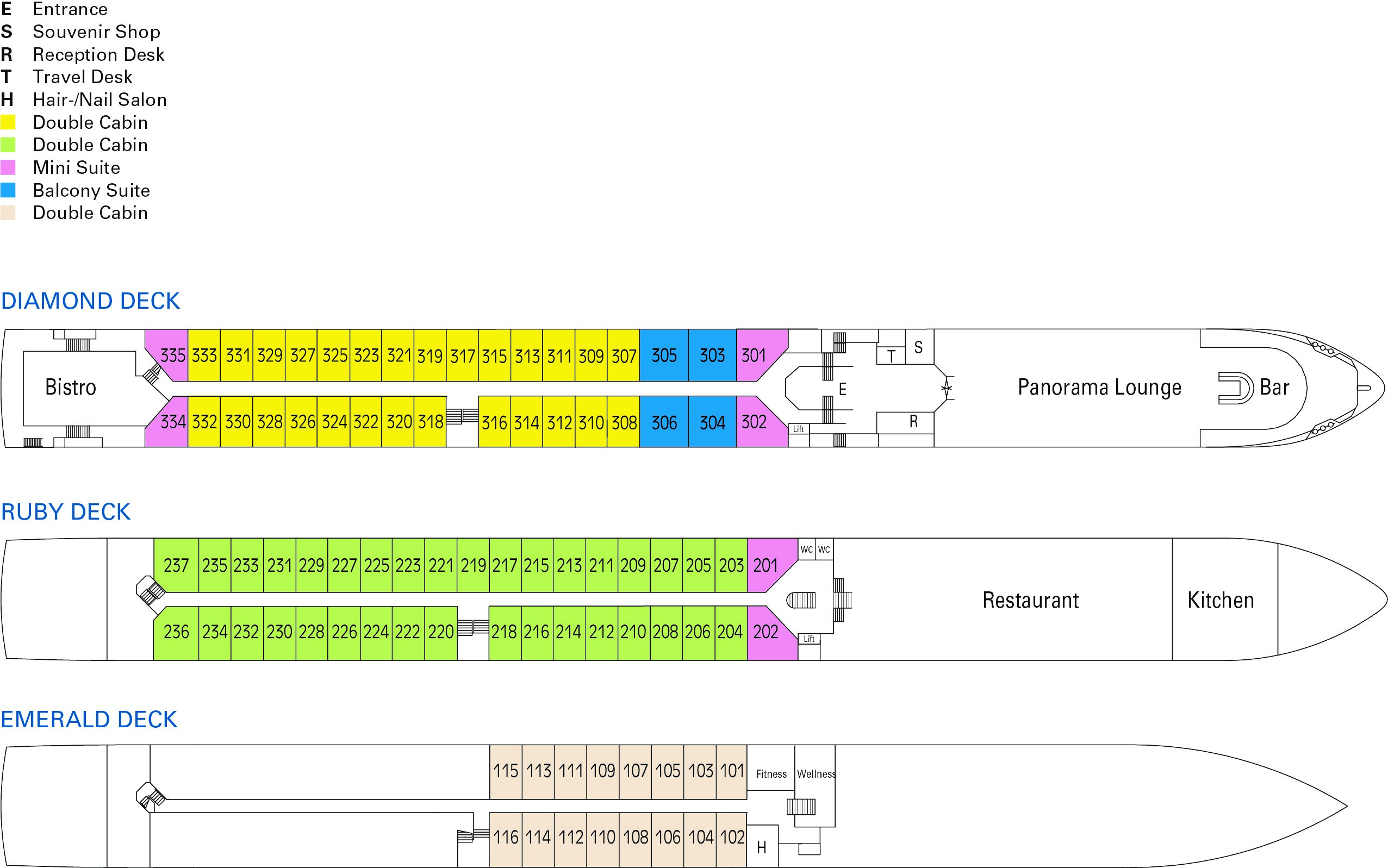