Let us inspire you. Here you will find some pictures and information about the cities on this route.

Düsseldorf, the capital and second-largest city of North Rhine-Westphalia, is a mix of old and new Germany. The Altstadt, or Old Town, is centrally located behind the Rhine Embankment Promenade and has been dubbed “the longest bar in the world” due to the estimated 300 bars and discos in the area. Shopping aficionados will be more than pleased with the variety of shops and interesting boutiques on Königsallee and Schadowstraße while fans of history and culture will not want to miss visiting St. Lambertus Church, the Rathaus (Town Hall) or the 13th century Schlossturm (Castle Tower) which houses the nautical museum. Those with more time on their hands may also consider short trips to visit the Baroque-style 18th century mansion of Schloss Benrath or the 12th century ruins of Kaiserpfalz in the picturesque town of Kaiserswerth.

Boppard is a small city consisting of nine villages located in the Rhine Province in Germany. The city is filled with Roman designed cathedrals and medieval buildings along its winding roads illustrating the life of Roman, French and German inhabitants that occupied the city in the middle ages.

Nazi soldiers once occupied Rhine Province during world war one, and as a result, seized Boppard. Some buildings today still depict ruins that tell the story of aerial assaults and military combat fighting of the first world war. There are many significant landmarks such as the Former Electoral castle, Romanesque Revival church, the Town wall, and much more. Various events are held in the Summer, and wine festivals are held in the spring highlighting the city's vineyards and wineries.

This beautiful city is part of the Rhine Gorge UNESCO World Heritage Site situated alongside the River Rhine in Germany. There have been vineyards on the steep slopes of Rüdesheim since the first century when the Romans occupied the site. There are several ancient castles within the confines of the city including the ruined Burg Ehrehfels and the atmospheric twelfth century fortress, the Boosenburg which often hosts many popular live concerts. The stone castle of Brömserburg which dates back to the tenth century is the location of a museum dedicated to wine. Near the city's Market Square is the beautiful church of St. Jakobus which was largely constructed in the early fourteenth century. It is now a venue for the Rheingau Musik Festival of classical and choral music. The city hosts many other festivals including a summertime firework display, a wine festival and a Christmas market.

Prior to German reunification, the city of Bonn was the capital of the Federal State of West Germany. The city is located on the River Rhine within the German Federal State of North Rhine-Westphalia.

Of interest to visitors is the Beethoven House. The museum is dedicated to the life and works of the world famous classical music composer, Ludwig Van Beethoven. A major landmark within the city is the Roman Catholic cathedral known as Bonn Minster. The structure of this building was developed during the period between the eleventh and thirteenth centuries. The Market Square is a magnet for architecture fans who love to marvel at the Rococo buildings. The old City Hall is found in this area and is a popular venue for tourists. The city's University is home to the Poppelsdorf Palace. This 18th century building houses natural science artefacts and is close to the city's botanical gardens

The MS VIVA INSPIRE impresses with its spacious architecture, which gives each of the 142 guests plenty of free space, even away from the 71 cabins. In order to meet the individual requirements of the passengers, different cabin types are available. On the Diamond Deck there are 22 master suites, unique retreats with a size of approx. 30 m² - unique on European rivers. The eight spacious loft suites, which extend over two decks and are a light-flooded retreat with the best view thanks to panoramic windows, also have a very special atmosphere. The beds in all cabins are fitted with the highest quality bed linen and thick memory foam mattresses. A selection of RITUALS bathroom products are provided in the bathrooms along with terry bathrobes, towels and a hairdryer.

Travel dates
Travelers
Please note that only double and single occupancy are available via our website. For our family rates please contact us by phone or email. If you wish to book several cabins, a separate booking is required for each cabin.
Adults:
Deck plan
Here you can see an overview of the decks. 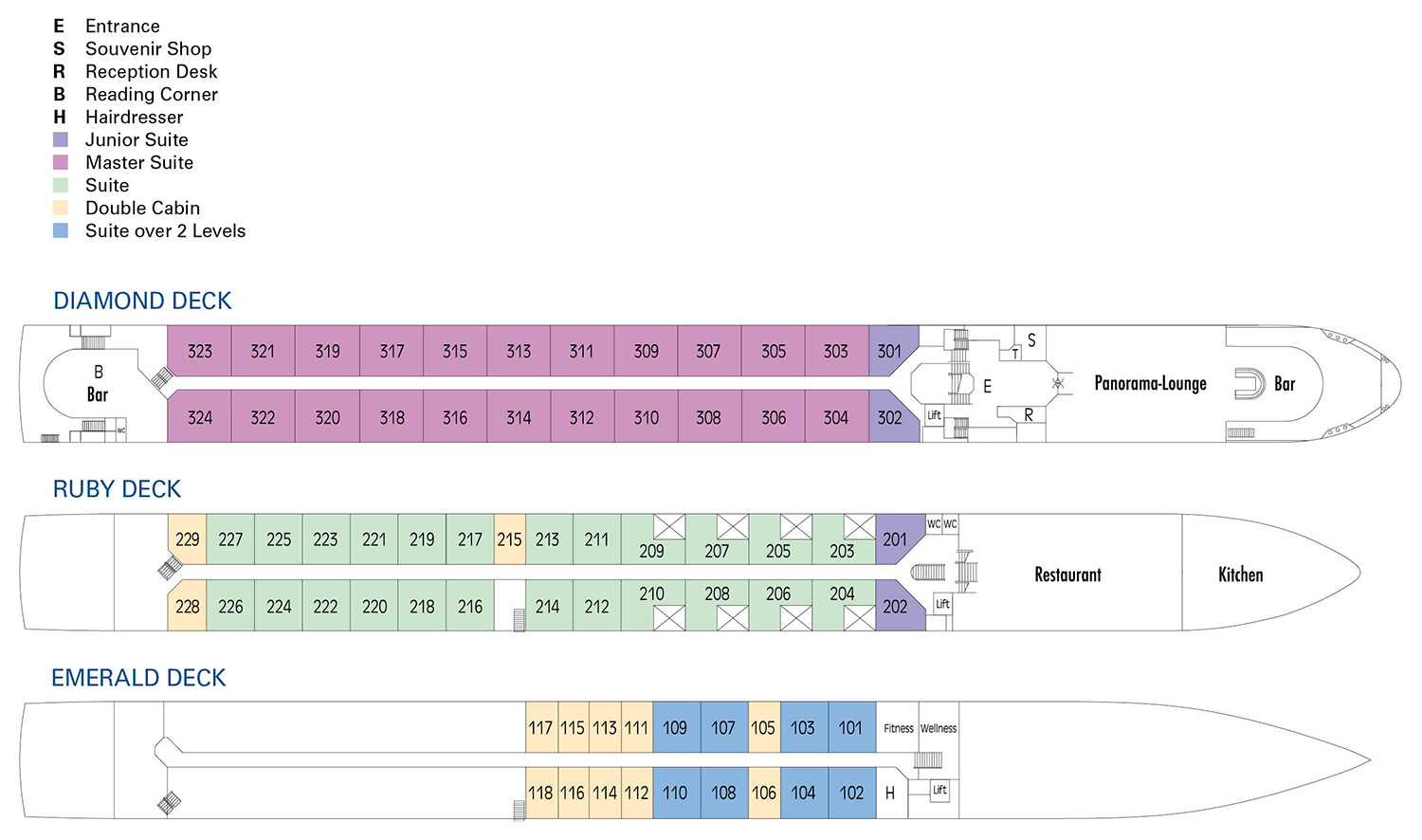